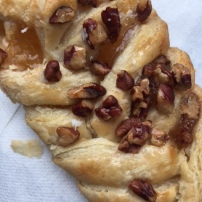 I’ve always said that one of my favorites things about living where we do is how close we are to so many great cities/places. It’s awesome, we don’t have to deal with daily traffic and the higher cost of living but have about a dozen options for concerts, sports or day trips. Plus, the Fiesta gets crazy good gas mileage. And we’ve taken full advantage of that lately. Maybe a little too much. I’m exhausted, but it’s been fun. Our travels:

I adore Lexington. If I ever have to move for any reason, it’s at the top of my list. I always feel like it’s somehow a big city without being a big city. We have friends there too, so that’s nice. It’s always a good time. This time we were there for a concert by the band Protomen at The Burl (a great new place). (Do you like Mega Man? Rock opera? Queen? Fun in general? Go to http://www.protomen.com/ and thank me later.) We were there for less than 24 hours but  managed a trip to Ramsey’s (http://ramseysdiners.com/)  and ending up getting doughnuts and coffee (well, I got the coffee) twice at North Lime Coffee and Donuts (http://www.northlime.net/). I’m now the person who Googles “best doughnuts in ….” before I go anywhere (because I’m good at ignoring genetics and apparently want diabetes) and this place was at the top of the list. I highly recommend it. The doughnuts were great and the Shakey Nate and Brown Bear drinks were amazing. My  Welcome to Night Vale shirt also got complimented while I was waiting in line for my coffee, so I pretty much just want to live there now.

If you’ve actually read my previous posts, you know how I usually feel about going to a Cardinals game. It’s not really my thing. It’s usually hot and crowded and I’d rather be watching hockey, yet somehow Justin convinced me to take not just one but two St. Louis trips this year. The weather was surprisingly nice, a Tim Horton’s stop was promised and away we went. It was also the last game of the season and a playoff spot was a possibility, so there was a tad bit more excitement than usual. A good time was had by all. We tried a place that we’ve thought about forever but just never stopped at downtown called Bailey’s Range (http://baileysrange.com/). So good! There was enough pretzels, cheese and good beer that I was almost able to ignore their  “community tables” (more on that later).

It’s always a happy coincidence that Predators preseason hockey and fall break just happen to end up being at the same time. Brody pretty much just bides his time between the Stanley Cup finals and the start of the next hockey season, so this trip is always one of his big treats for the year. We took full advantage of his Preds Kid’s Club membership, planned an overnight trip and headed off for some hockey.

Since we go to Nashville fairly often we have some favorite restaurant stops that we always try to include, like Pancake Pantry (http://www.thepancakepantry.com/). This year we finally ventured down to Hatti B’s and tried some of this Nashville hot chicken (good stuff, by the way) and Justin also suggested we try another famous Nashville restaurant, Monell’s.  Monell’s has often been recommended to us by members of the McGill side of the family and I have long been fearful of the day when we would actually have time to go there. Not because of their food (it’s actually quite good), but because of their motto, “Enter as strangers, leave as friends.” This is a place that requires you to sit at communal tables (not “community” like Bailey’s; there you sit next to each other but order on your own and can ignore the rest of the patrons), pass food to each other and engage in awkward small talk. Much like the “greet each other” time during church, this idea was enough to leave me in a full panic. It was basically an anxiety attack with biscuits, but I made it through. Until the next trip anyway.