We’re only nine days into the new year and I’ve already learned so much. Not about actual somewhat, or at least for the most part, important things. But things none the less! A sample of my newly acquired knowledge:

My husband is a home improvement perfectionist. Apparently.

Yesterday I started what I thought was a quick, little home improvement project: putting up a small amount of self-stick tile above the shower. Seemed easy enough, except I did not figure my height (or lack thereof) and non-existent wrist strength into the equation. I almost made it to two tiles when it became obvious Justin was going to have to step in. This led to him pretty much taking over the project which was great until I realized he wanted to do stuff like measure each tile, not take breaks and do it “the right way”. Where’s the damn fun in that?

I should also note that it looks great, I’m very appreciative of his hard work and that he was indeed correct about “the right way.” That being said, I’ll be sticking to my haphazard, break-taking style, but to each their own.

Brody has a new tooth!

That is finally growing in two years after the original tooth was pulled. He’s definitely my child. At least it wasn’t his two front ones like it was in my case. Third grade was not fun.

And all I want is a pretty pink teapot.

A few years ago, we somehow wound up with Justin’s grandmother’s set of dishes. They feature delicate pink roses and are not at all my typical style, but we needed dishes and she needed to get rid of dishes, so to the kitchen they went! Against all predictable odds I have come to love them. They work with the thrown-together decorating style I’ve just decided to embrace and serve their purpose well. I was also ecstatic when I rediscovered the cute tea cups and saucers that were hiding in a tall cabinet around the time my Sherlock obsession began. Proper tea time was finally at hand! Until I realized that the only thing the set was missing is a teapot. And now it’s all I want. Luckily, the pattern is fairly easy to find from a bunch a people on Etsy. But I just have to decide on which style I want. The contenders: 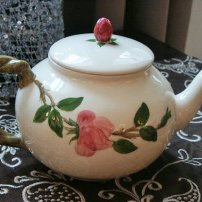 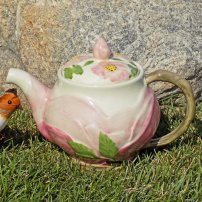 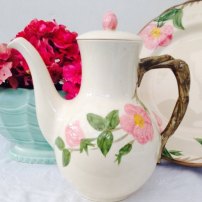 Kind of fun side note: Teapot number 1 and the cup and saucer set was randomly featured on last week’s Big Bang Theory. I still can’t decide which one is my favorite. I should probably just get them all.

I’ve also learned that allotting a year to teach myself how to eat with chopsticks was overshooting it by about 51 weeks. But, hey, I’ve already accomplished something. So, win?

2 thoughts on “Some stuff I’ve learned…”